Hey Donald Trump, you moron! It wasn't Arabs. Israelis celebrated the destruction of the WTC.

Just in case you missed it, Donald, the evidence is right here in the FBI files.  Where's yours?

And didn't you know that one of the Israeli Mossad agents knew about the upcoming 911 attacks as early as 1999?

And that a ton of evidence points to Israeli involvement in 911?

That one of the celebrating Dancing Israelis got married on 9-11-2002?

That orthodox Jews consider 9-11-1999 to be the 6000th anniversary of the birth date of the mythical Adam, and the beginning of the "Judgement of Nations"?

German news magazine Der Spiegel:  The truth behind the "celebrating Palestinians" on 9-11
2 comments:

What does a designer jeans mogul know about the destruction of the World Trade Center?

was a major player in the designer jeans trade of the late 1970's.  Known for the Sasson label, Guez got into legal hot water over the obvious similarity between the Sasson name and the Vidal Sassoon brand.  The similarities did not end with the spelling as both Sasson and Sassoon are (according to Guez) pronounced exactly the same, as seen in this1979 Sasson commercial.  By 1980, Guez was given a court order to change the pronunciation of his brand name.  Knowing an opportunity when he saw one, Vidal Sassoon quickly developed his own brand of designer jeans, becoming one of Sasson's main competitors.

Enabled by his new found wealth, Guez started using cocaine in 1981 and soon became addicted. Due to Guez' coke fueled bad management, his Sasson brand, at one time a $700 million empire in 1970's money, went bankrupt by 1988.  The assets were eventually sold off along with the trademark.


During the bankruptcy proceedings, the drugs and alcohol did most of the talking.  Guez was accused of threatening the life of U.S. Bankruptcy Judge Burton Lifland, assaulting a federal marshal, and was twice cited for civil contempt.  Sasson's bookkeeper claimed Paul Guez and his bodyguards threatened to kill him by pointing two loaded pistols at his head.  He stated they also hit him over the head with a ledger book and struck his hand with a pool ball rack until the rack broke.

The stew emerging from the Sasson debacle caught the attention of the monthly rag "Spy", which reported on the court proceedings in its December 1987 issue. The court transcript shows Paul Guez threatening the appointed trustee by


first telling him he knew some wealthy but dangerous people, and that he also knew where the trustee lived. The exchange took an even odder turn when Guez began talking about his Israeli Defense Force training.  An attorney questioned the trustee: "Did Mr. Guez discuss with you his experience in Israel?"  To which the trustee responded: "He indicated to me he was an arms expert...He was capable of blowing up a house with demolitions so that no trace of that house or anything that caused that explosion could ever be found."

The Israeli Defense Force is known for demolishing Palestinian homes in order to make way for illegal Israeli settlements, often declaring the inhabitants "terrorists" in order to create some sort of rationale for the act. The only secrecy involved is when and where it will happen, as shown in this video of a Palestinian family getting unceremoniously thrown out of their soon to be rubble home.

IDF demolitions are no secret, they are done all the time with explosives or bulldozers.  So why would Israel, as Paul Guez indicated, be using a demolition method that leaves no trace of the method or the demolished contents?

Israeli Defense Force demolitions are carried out by the Sayeret Yahalom, an elite combat engineering unit of the Israeli Engineering Corps of the IDF. The name "Yahalom" (diamond in Hebrew) is an abbreviation of "Special Operations Engineering Unit".

Sayeret Yahalom specializes in special engineering missions that include, but are not limited to:
There are multiple divisions under Sayeret Yahalom.  Yael (which means Ibex) is the division primarily concerned with demolitions, and described as "an elite combat engineering and commando unit of the

Combat Engineering Corps. It is specialized in accurate demolitions and planting pinpoint explosives along with other high-scale combat engineering operations in and outside the Israeli borders."

Although each IDF Commando unit has its own insignia, IDF Servicemen are not allowed to wear it in public due to the unit's classified nature.

Some of the IDF Commando units became public over the years include (other units which have not gone public also exist)...

Urban Moving Systems was a known Israeli Mossad front that became famous for five of its employees (agents) known as the "Dancing Israelis".  Three of the Dancing Israelis were spotted celebrating the attack on the World Trade Center on the rooftop parking area of the Doric Apartments in Union City, New Jersey.  One of the three was Yaron Shmuel.


Shmuel's LinkedIn profile as of 3/28/15 (archived here) show his work experience in security, explosives, and training K-9 dogs.  His group affiliations include companies dealing in explosives, security and defense.  One group Shmuel belongs to is CBRNE Central, which "hosts discussions related to public-domain knowledge of chemical, biological, radiological, nuclear, and high-explosives". 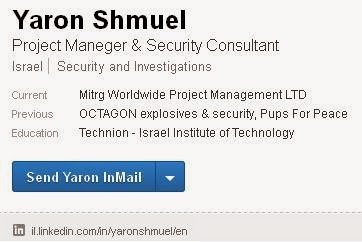 These days, the once failed jeans king Paul Guez is a changed man.  Off the booze and cocaine, (or so he claims) Guez became chairman of the board of Omni Ventures in 2011.  In 2006 he started a new clothing company in Los Angeles, after a friend and benefactor basically saved his tuchus by loaning him half a million dollars.  His son David Charvet is an actor and singer, appearing as Matt Brody on Baywatch and Craig Field on Melrose Place.

How the WTC was destroyed - pulverized into dust on 9-11-2001, is to this day the subject of intense debate by many groups including the 2300+ member strong Architects and Engineers for 9-11 Truth.

Did a little known technique known only to the Israelis bring down the towers?  Thermite?  Mini nukes?  Scalar waves?

Perhaps Paul Guez knows for sure.

Was 9-11 an inside job or a Mossad job? by Laurent Guyenot mentions Shmuel's wedding date, Facebook profile and LinkedIn page.

A Dancing Israeli's Wishlist: Further Proof of Foreknowledge of the 9-11 Attacks?